We left Biduedo a little later than we would have liked, knowing we had a sort of long day of hiking ahead. We worked our way down to Triacastela through small villages, rolling farmland and country roads. At Triacastela, we stopped for breakfast, finding a gem of a place that had fried eggs, ham and cheese sandwich, toast, orange juice and coffee for 5€ each. 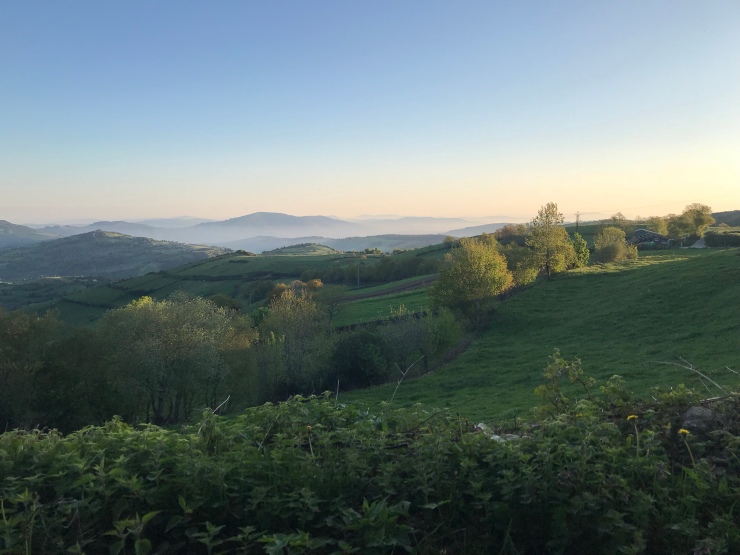 There is an option at Triacastela to go out to Samos, a monastery in a peaceful river valley, or through San Xil, a shorter route with more natural pathways. We chose the latter and worked our way up to Alto Riocabo and through many small villages before reaching Sarria. 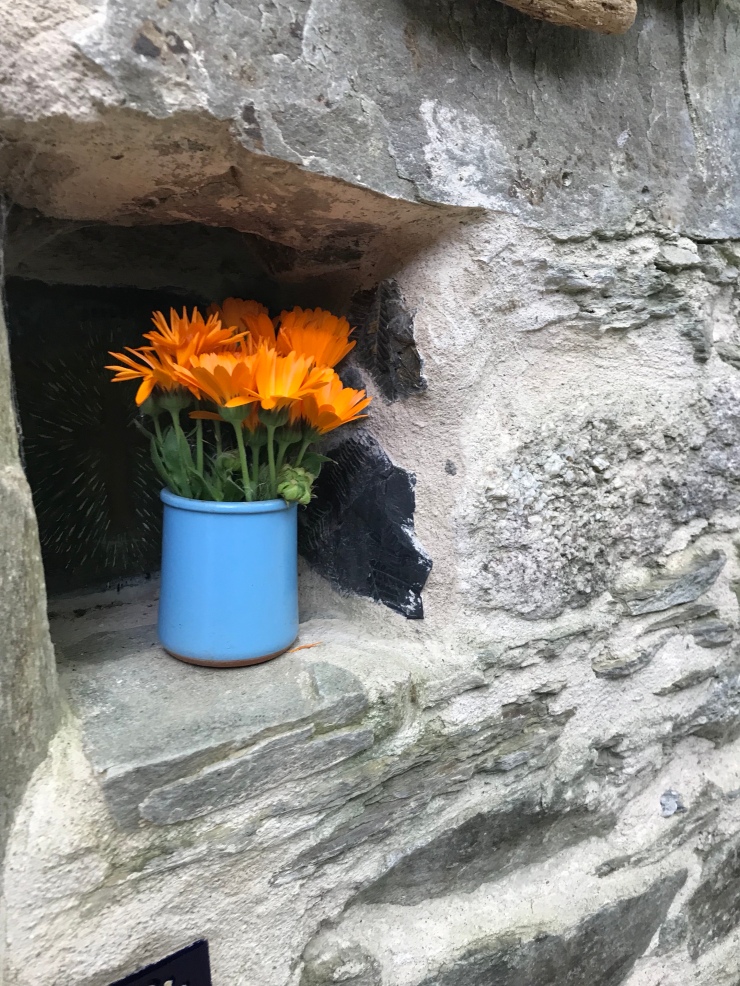 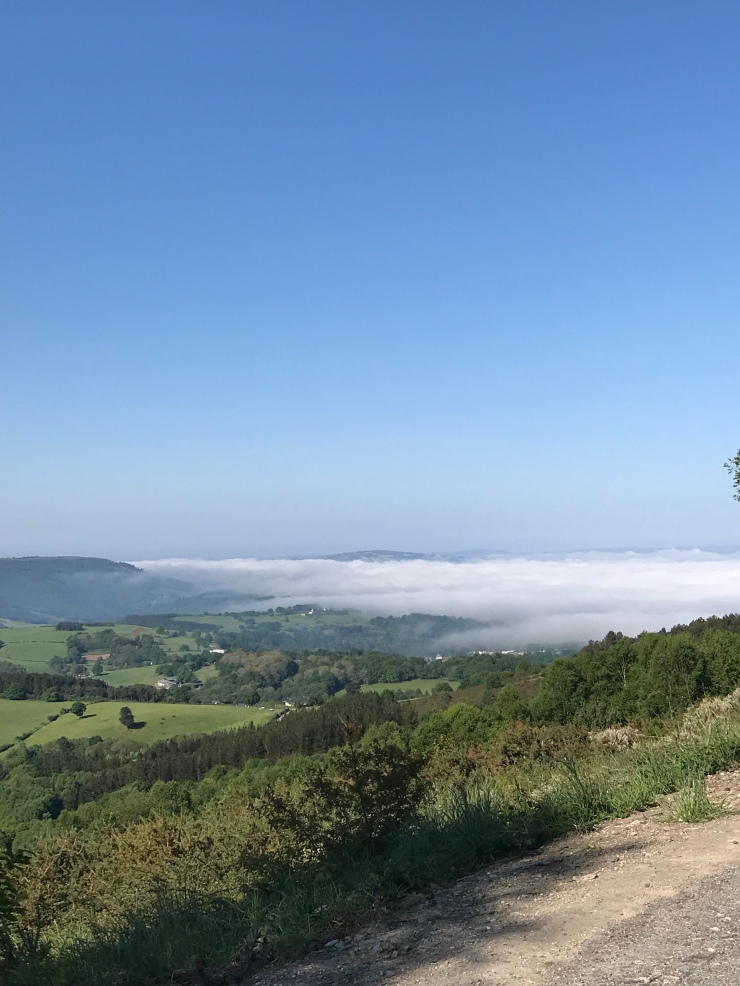 Sarria is a bigger center, and is a common starting point for those who are here to walk the final 100km. As it was Sunday, the cafes and bars were busy. Many stores were not open, but there was apparently a market open up the hill (we never quite made it up far enough). The way takes you through the old town area, and the last section was a steep incline up a bunch of staircases. We eventually found our albergue, which was nicely located near many cafes and restaurants. The host gave us a four person (two bunk beds) room with private bathroom, not what we booked but it worked well! We were able to wash clothes and hand them to dry on a third level terrace full of clothesline’s. 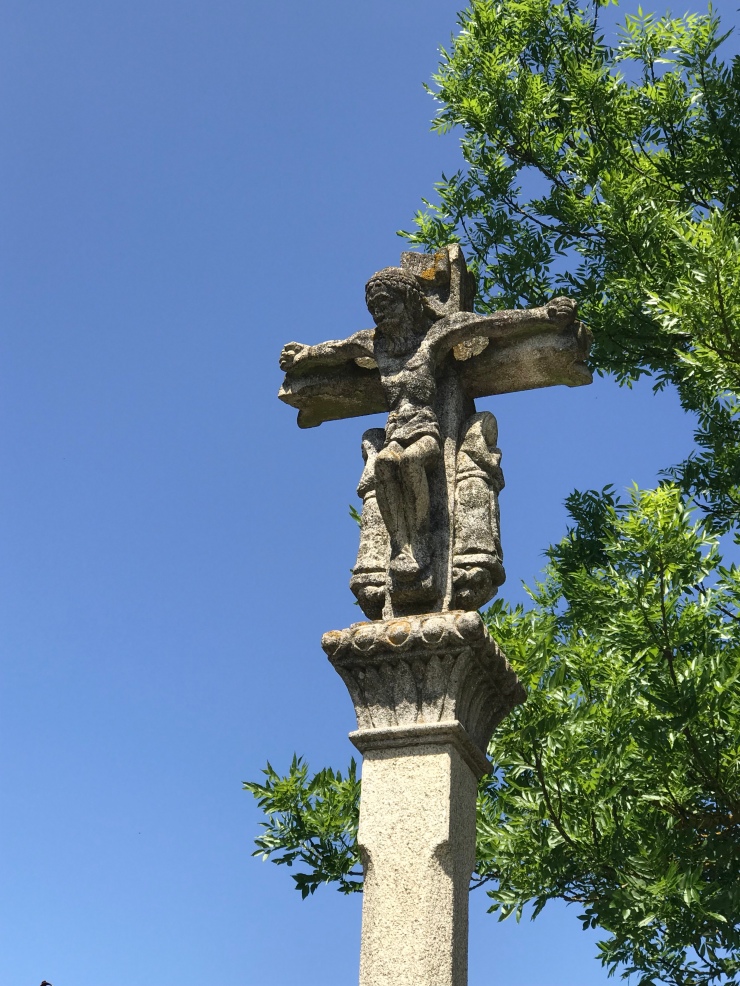 Next we needed to find food and I had been itching to try the Pulpo, a Galacia specialty. It is boiled or steamed octopus, served on a plate, drizzled in olive oil and paprika. And it was awesome! We also shared croquettes, a Spanish tapa that Ally has come to really enjoy, and a plate of Galacia cheese – also very good! Oh, and there was bread. There is always bread!

It was misty when we got up, but that soon burnt off. Leaving Sarria around 7 am meant we needed to find some breakfast, and we wanted to find a place to purchase a new credential or pilgrim passport as both of ours are nearly full of stamps. We stopped at a nearby cafe for a bite and the owner sold us two new credentials for 3€ each ( a bit high in my opinion). 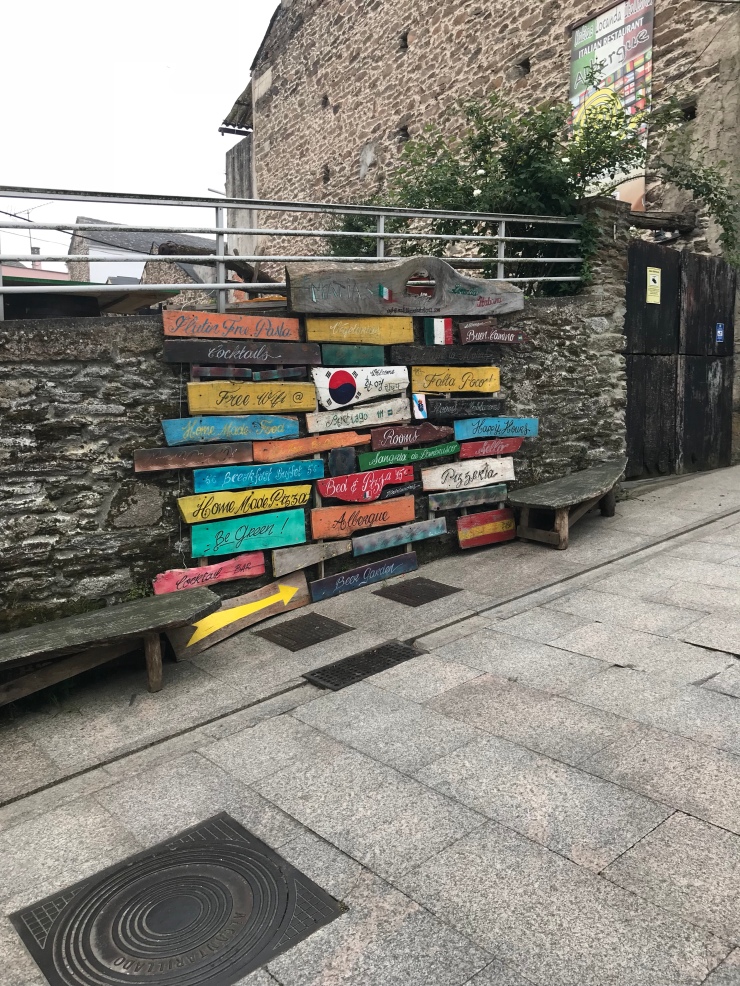 The atmosphere is different on the trail today, and people comment on this all the time. Because so many new pilgrims are joining the Camino, the population of pilgrims has quadrupled. That is all fine and well, and it shouldn’t bother me much, but trail etiquette went down the toilet today also. We could tell who the newbies were, fast walkers, always on your tail being impatient in their brand new gear. And truthfully, at the end of the day, we could tell who they were as they were the limpers and deflated pilgrims. People think it’s easy because it’s only 115 km, but if your body (and mind) is not prepared for it, you face many aches and pains at days end. 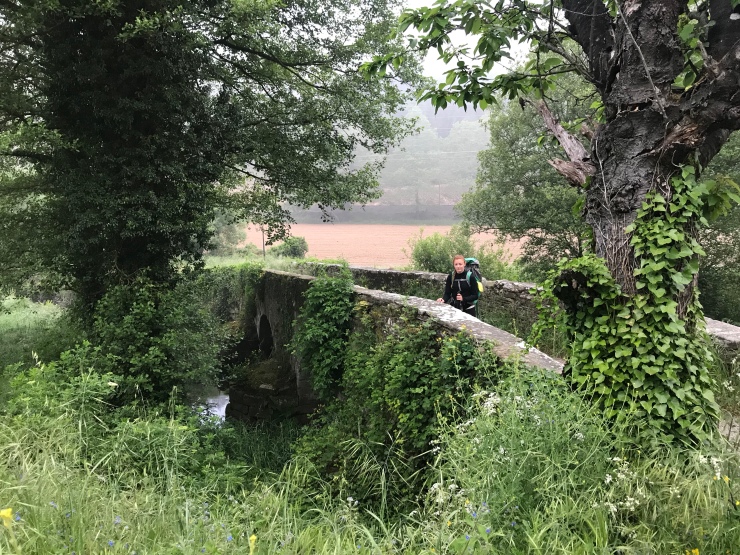 The other thing we experienced was some young women wanting us to sign a petition about something. I had read that this is a scam and once you sign this document written in Spanish, they demand money from you. Truthfully they were very scary looking, very aggressive. Luckily we were in a group of four, walking together with a couple from Guelph that we had walked and talked with for a long while, and we all declined there advances.

From Sarria, we climbed upwards for quite a while. They say the hills get easier but after over 500 km of walking, the hills still kick my butt. This path was some of the prettiest we have gone through. Much of it lined with stone fences and passing through villages and farms. 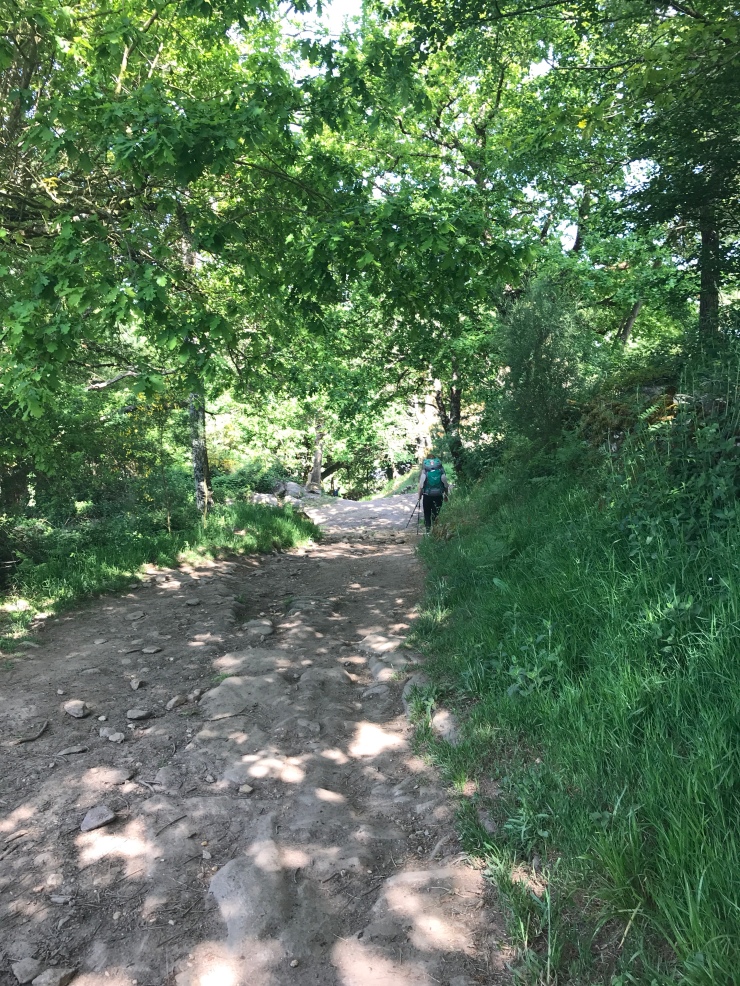 We passed the 100km to go marker and that made both of us happy I think! We had stopped in one village and grabbed a sandwich, probably the only bocadillo that Ally enjoyed! It was a ham and cheese omelette folded in to a loaf of bread. We continued on towards Portomarín. It really was not a long day, we got to Portomarín around 1 pm, found the albergue, showered, washed clothes and went for supper. Ally had a Galacian beef stew that was fabulous, and I had a Galacian cheese and nut salad…..and we shared a plate of Pulpo! 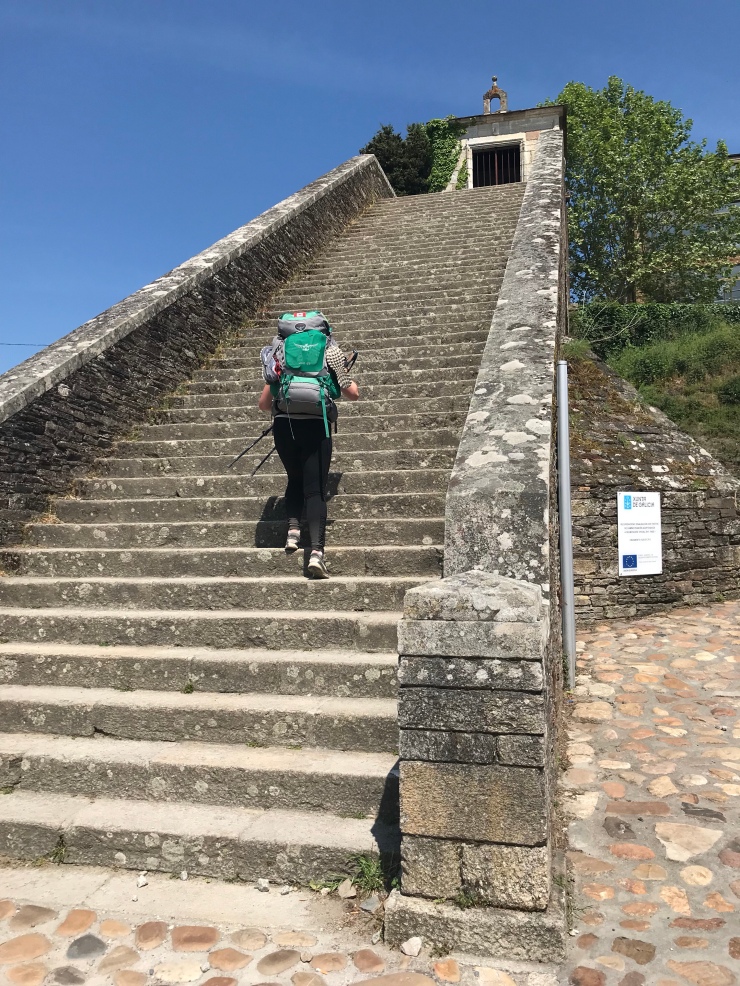 Portomarín is a pretty city. To access thecity you come down a steep hill, cross a very long bridge over the river Mino, then up a steep staircase. We got rained on tonight. Lots of thunder and lightning and big downpours. But it was refreshing, just hope it doesn’t last long!

Also hoping that this dorm room with 32 beds is quiet tonight.