The last few days have been tough so I have not updated the notes here, but here goes.

We left Sansol early in the morning as the great bed race began early. We were only planning to go to Logrono so it was not a huge distance, just 21 km. The early morning sunrise over Torres del Rio was beautiful. 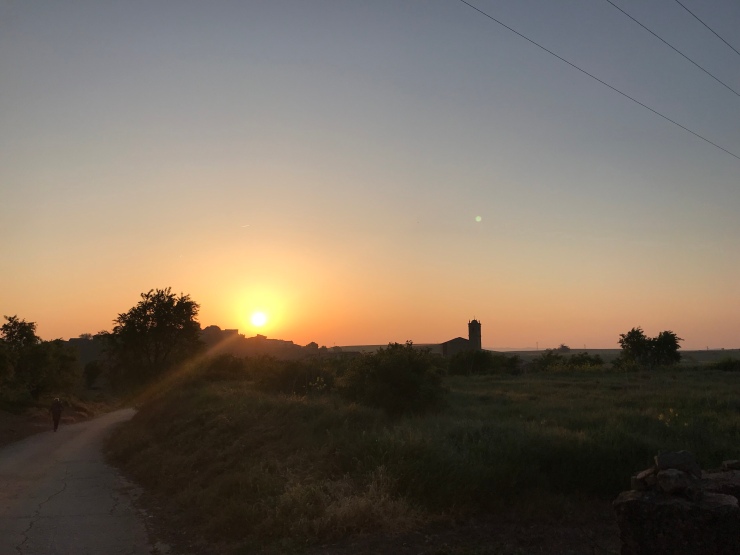 The walk was good but sometimes tough as it went over rolling hills, valleys, dirt and stone. Ally has not slept well and is sore so it has been a challenge out here. We dined the night before with our friend from Idaho, as she was staying at the same Sansol albergue. She left before us, but we met her on and off again along the road. 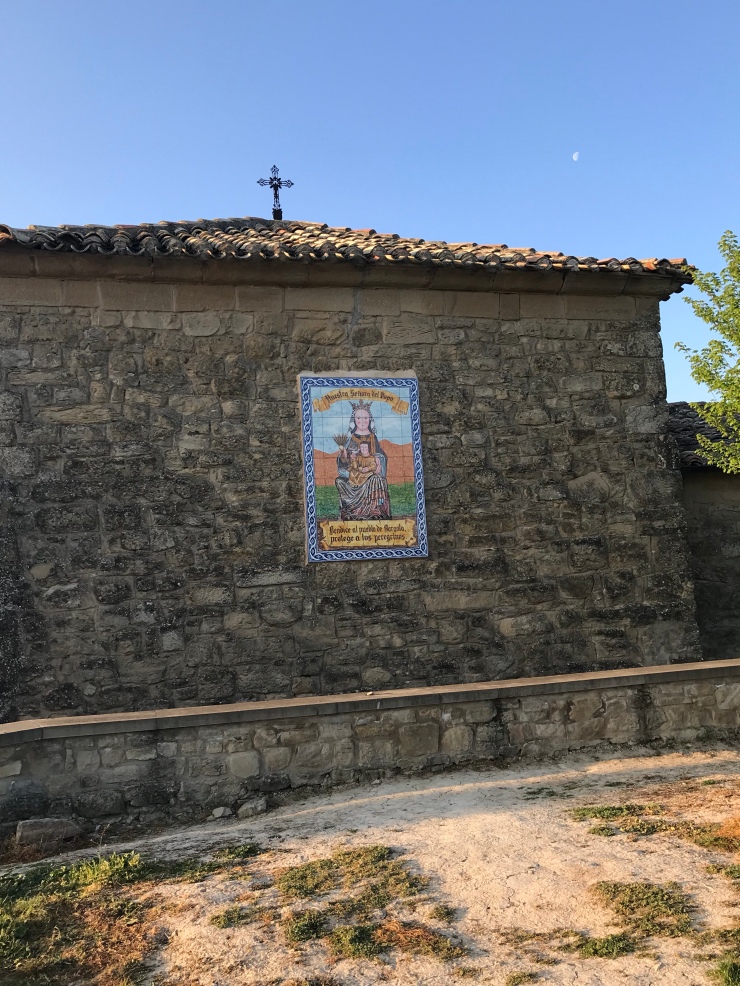 We made our way through Viana, a really beautiful town with a pretty cathedral. The outside of these churches and cathedrals really does not prepare one for the intricate details and artwork inside.

From there we walked through the industrial areas and in to the city of Logrono. It was Sunday and also Mother’s Day here so very busy. We stopped at the pilgrim information building first, found the address of an alberque near the cathedral and headed that way. The city was bustling and vibrant and a little unnerving for those of us who were hot, sweaty and wearing large Camino backpacks. Half of the crowd stares st you while the other wishes a “Buen Camino”. We lucked out and found a private room at the albergue for just the two of us. There was a bunch of pilgrims who started out from SJPP together here again. 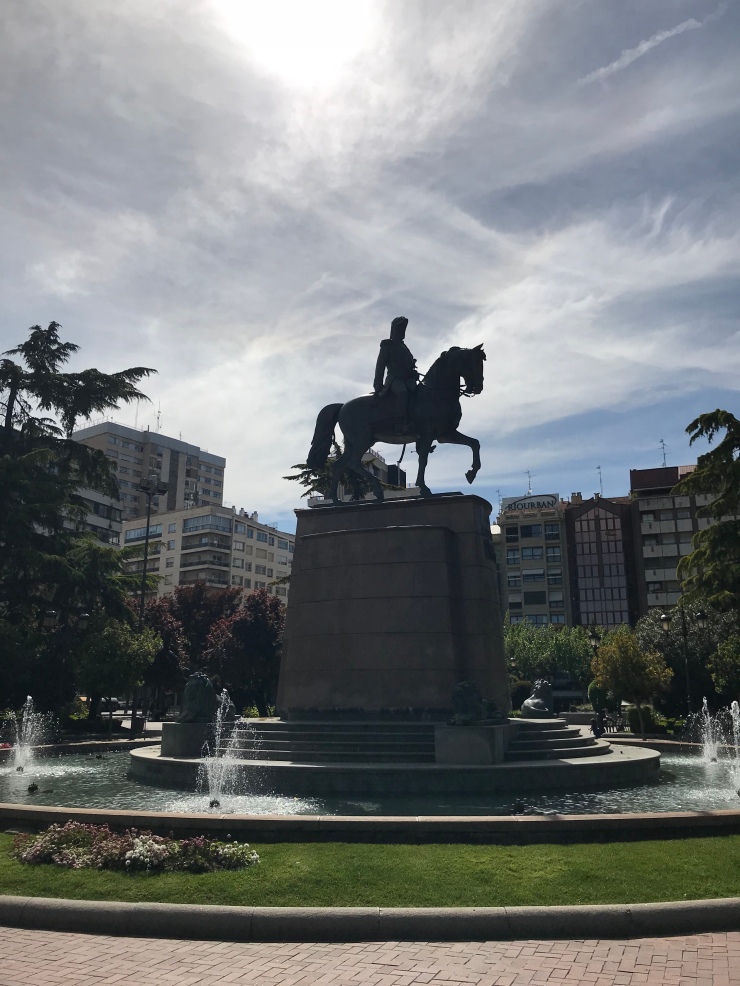 The city is lovely. So many people out on a Sunday afternoon, so much atmosphere.

The next morning we head out of Logrono. It’s a bit confusing and going through the outskirts one really needs to watch for signs. We corrected a lost Swiss pilgrim who had missed a few arrows and was unsure where to go next. This little lady from Switzerland has been on Camino since she left here home on March 1st. On foot. When she reaches Santiago, she will have walked 2400kms. Amazing the people you meet out here.

Leaving Logrono through the vast park system was interesting. Many locals were out walking, running, cycling through the huge network of trails and parks. We then started to walk through the rolling hills and vineyards.

The walk was starting to get warm, hot actually. The early risers in most albergues set out to avoid the afternoon heat. I now understand why. We got sun burned, but only on half of our bodies!

The regular stop on this part or stage is Najera, but after stopping for a break there we decided to push on the next 6 kms to Azofra. Probably a mistake…..actually certainly a mistake. Ally’s blisters were bad and we were walking through mid-afternoon heat which made it quite worse. This day couldn’t get worse, or could it?

We had been travelling off and on with an Australian family and they had also pushed on to Azofra. When we got to this town, we walked through looking for the albergue. It was a municipal alberque, which means it’s a bit cheaper. We did get beds, however the hostess said they were not in the building. Wait, what?

We were led down the street to the overflow. We were given two beds in the last room, and two other ladies came after to fill the last beds. Showers and toilets in the same room, unisex. That’s something I am not used to…. taking a shower while some person, male or female, in the next stall is having a movement. Anyways..,.

We went to a local pub for the pilgrims meal. You know it’s a bad sign when the owner/bartender has to leave after you have ordered and got down the street to buy stuff for the meal he is about to prepare. Again, a sub-par meal. But the thing that struck me the most was the table of pilgrims beside us, women from US, UK who could not communicate with the hostess. She did not speak English at all, and they asked her numerous questions, confusing her and making her angry at the same time. Theses ladies commented on how rude she was and why would she not learn English to help her business. Why would she? I mean, this is her business but why wouldn’t we as patrons try to learn her language as we are the visitors? She left in a huff, went in the back and when she came out to take Ally and mine order, it took a total of 25 seconds. We point to what we want, she writes it down, asks if we want Agua or vino and off she goes. These ladies sat there dumbfounded, and even commented on how smooth it went. You just have to adapt a bit, it’s not hard. I have successfully had conversations with people here who speak zero English, just by being patient and trying my best to explain in some broken Spanish terms. 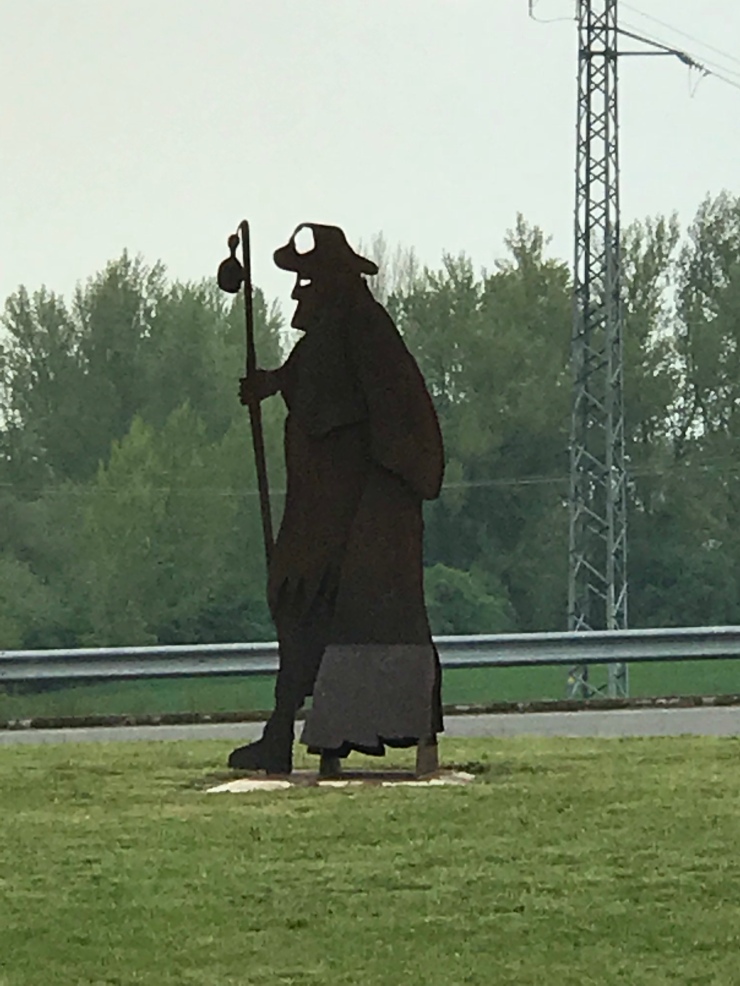 Today was a tough one though, Ally has bad blisters. After we checked out of the barn (albergue) and stopped for breakfast, we slowly made our way out of Azofra. Again rolling hills and through crops. The first town we came to was super strange. Ciruena had a golf course/ resort and that’s about it. There was row housing and tones of newer residential buildings but they seemed mostly to be boarded up. We continued through to the older area of town. We went to a bar to see if Ally could get a taxi or bus to the next town. This is where my emotions and lack of Spanish kicked my butt. I could not get them to call a cab for me. The bar attendee wrote down the bus time as 10:20, a half hour wait. I waited with Ally and two more pilgrims joined us, both injured also, one girl from Australia and a man from Brazil. I felt comfortable leaving her at the bus stop with them so I pushed on.

When I got to Santo Domingo, I went to the bus stop thinking Ally would have been there for a long time. She wasn’t. And I turned the phone on, and her message popped up. No bus, no taxi. The three injuried peregrinos were on foot walking the 6 kms to Santo Domingo anyways. I struggled with this as I thought I should have been there with her but she made it, tender feet and blisters and all. I got a hotel, thankful for my Romanian friends for sharing internet with me to book a room. Once Ally got here we got cleaned up, washed and dried clothes (that is a big deal because you can’t just use a dryer anywhere as everyone hangs to dry clothes).

Santo Domingo del la Calzada devoted his time and life to God. He became a servant off the pilgrim, caring for pilgrims enroute to Santiago. We walked through the cathedral and even through his crypt.

This is a pretty historic city, and we did walk around some of the old area to check things out. TomorrowAlly will bus ahead and meet me at Belorado. Looking at about 23 kms and she just needs to heal a bit before walking anymore. That’s reality out here; today we saw many pilgrims injured and struggling. Part of the trip I suppose.

By the way,I am going to post this picture again.

The pilgrim in the tan outfit and hat is blind. He is walking this Camino blind with the help of his wife. These are inspiring times….